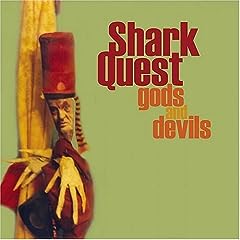 Shark Quest are an instrumental rock band based in Chapel Hill and Durham, NC. They were formed in 1995 and have released three full-lengths on Merge Records. Guitarist Chuck Johnson joined the group in 2000, collaborating with them on film scores for Brett Ingram’s award-winning documentaries Monster Road in 2003 and Rocaterrania in 2008, and on the Gods and Devils album in 2004.

Past and present lineups have included:

From the Tiny Mix tapes Review of Gods and Devils:

“The most fascinating aspect of instrumental music is the requirement that the listener use his or her imagination to create a story that is not simply provided through the use of lyrics. Some may even insist that words limit the ability of a listener to use imagination to define the meaning of a song on his or her own terms. However, an instrumental outfit needs to be convincing enough in its presentation to ensure that a listener will be inspired to develop a story to fit the songs and continue to listen to that story. Shark Quest’s unique approach to instrumentation makes it almost impossible not to conjure up fascinating images in one’s head while listening to their music. Their somewhat baroque style and use of unconventional and exotic instruments, such as the mandolin and marimba, set the stage for strange tales from other worlds and eras.”